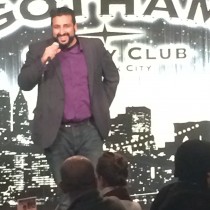 I have been invited to New York to perform as part of the New York Arab American Comedy Fest at the Comic Strip Live and Gotham Comedy Club. This will be my 5th year in a row performing as part of this festival. It runs from Thursday September 29th to Saturday, October 1st with multiple shows each night. I am performing in 3 shows this year. 1 each night. Please let any of your family and friends on the East coast know about the shows. They will definitely need to buy their tickets in advance because these shows sell out every year. I have put more details and links to all 3 shows below.

Thank you for all your support over the years. I hope to see you all this weekend. END_OF_DOCUMENT_TOKEN_TO_BE_REPLACED

The 11th annual New York Arab American Comedy Festival presents the Guinness Book of Arab Comedy: This is a NYAACF first! 20 comics in one show! This will be the largest Arab comedy event ever and stars comedians who have appeared in movies, television, documentaries, and have headlined comedy clubs world-wide. This ground-breaking super sized show is not to be missed.
END_OF_DOCUMENT_TOKEN_TO_BE_REPLACED